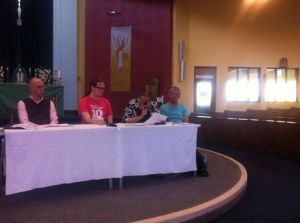 Below are comments made by some of those who were there;

“Around 120 people turned up last night to a great public meeting organised by the Save Longton Cottage Hospital campaign last night. A well attended meeting, full of angry and energised people ready to fight to save their local hospital from the decisions made by unelected CCGs on huge wages. These suits had no answers to the concerns and criticism of ordinary working class people who instinctively link these attacks to wider privatisations.” – Jamie Chatfield who is the local organiser of Youth Fight For Jobs

“We had a good turn out and I particularly liked a comment directed towards Marcus Warnes by a member of the public. Marcus was saying the more beds there are the more will be full. A gentleman said, ‘so if all lanes on a motorway are consistently full does it make sense to close a lane!!” – Irene Sutton ex-Senior Staff Nurse at Longton Cottage.

“Direct questions were asked of the CCG people. Their response for the most part was a mixture of vague ramblings about ‘research and comparisons’ or the classic ‘I didn’t know that’. Very unsatisfactory” – John Morrey TUSC local election candidate for Meir South

“There was loads of anger towards the CCG reps and they deserve it. What amazes me is all the consultations I’ve been to say the exact same bull. Just different people. Was same with the academies and post office. Feels like ground hog day”. Denise Keen Chairman of Norton & Ball Green Community Action Union

“I thought the turn out was good. I think it’s made the bosses realise thatt they’ve got a fight on their hands. We wont be rail roaded into these closures. We pay our taxes and NI and want facilities for our loved ones at this end of the city.

I fail to see how these bosses are providing a good service for the population of south Stoke. They are stealing services from under their noses”. Longton Cottage worker

“We now need to put even more pressure on them (CCG bosses) as possible because they’re that scared that Poynor had to sneak out the side door to avoid a couple of nurses! And Warnes apologised to me because he exposed himself to be a liar in public” – Kris Caci TUSC candidate in Hollybush & Longton West at last May’s local elections

“I would like to know why they are taking beds off the wards already? I couldn’t say anything at last nights meeting as it hadn’t happened, but apparently they are taking them off the site today. I’ve had a text telling me” – NHS worker

“Far too much talk of ‘If, when and depending on this or that’ with regard to the ‘New Model of Care’. Clearly little understanding of the particular needs of the people in Stoke-on-Trent. Basically talking a load of crap!” – local resident Denise Ellerman

“I chaired the meeting and could sense a real mood of anger from the people attending, who felt passionate about how important LCH is to them. This wasn’t helped by the health bosses inability to answer any questions put to them. This mood will continue, which is why we are planning on organising more of these public meetings in other areas.” – Liat Norris TUSC election candidate for Broadway and Longton East in last May’s council elections

“This is the second time that I have publicly asked local health bosses face to face to carry out a real consultation over the future of Longton Cottage by allowing local residents and the Hospital’s staff to have a real say in the decision making process by agreeing to a referendum after both sides have been heard. And this is the second time not one of them responded. Why? They know what the answer would be, a massive vote in favour of keeping it open. And this is why we are not going away. We will fight to the end to save our hospital” – Andy Bentley – Trade Unionist & Socialist Coalition (TUSC) regional organiser.

“Why can’t the NHS supply and pay for the qualified nursing staff to run the hospital instead of partially closing it only to have to pay £90,000 a week to re open it to receive the “overspill” from Stoke University Hospital. Also the argument that they want people back in their own homes is nonsensical when there is no community care available.” – Jane Kelsall – Chairman of Norton & Ball Green Community Action Union and North Staffs Pensioners Convention

“I think the management of the CCG were left in no doubt regarding the feelings held by many about their decision to close the beds at Longton Cottage Hospital. This is the worst case of predetermination that I’ve ever witnessed.” – Alan Lear local resident from Normacot.

“One lady explained that she had been in hospital for two weeks and staff had asked three different community hospitals to take her but Longton Cottage was the only one that would. When she asked why, Stuart Poynor (health boss) said the others must have been full. Well if they were full doesn’t that mean that we need more beds not less?

Marcus Warnes said that Longton Cottage was old and unfit for purpose even though it was refurbished not that long ago.

I was very enthused by the meeting. Everyone was so passionate about the hospital’s closure it was hard for the chairperson to control some times. I feel the CCG’s definitely got the message that we are not going to give up the fight to save Longton Cottage. We will fight until the end.” – Mandy Marfleet, ex-care worker.

“The downside is that health chiefs made no attempt to hide the fact that they’re out to shut all community hospitals. That I find disturbing. But on the plus side, it was great that local people feel as passionate as we do about Longton Cottage Hospital.” Ex-Longton Cottage worker now shipped out to another hospital.

“The CCG’s turned up thinking their sales pitch would convince the people of Longton it’s the right thing to do and left with a different attitude and their tails between their legs. – Vickie Newbury – ex NHS Nurse

Speakers for SAVE LONGTON COTTAGE HOSPITAL WERE;

One thought on “Health bosses face wrath of Longton people!”